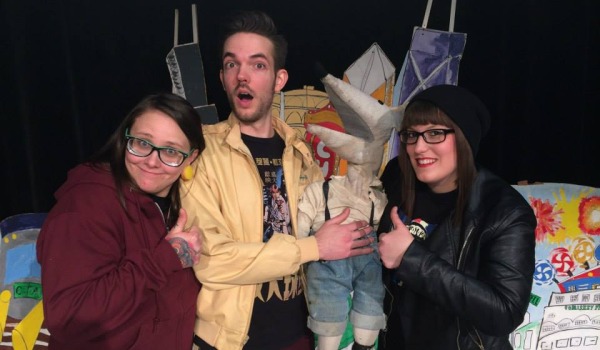 There’s no doubt about it: This is badass. The premise of Absolutely Not’s music video for “Stalker Two” begins with Madison Moore hitting Jenna Horwath–who’s bicycling her way to a booty call–with her car. Blaring “Wannabe” by the Spice Girls, front man Donnie Moore runs for his life before Jenna can repeatedly slam his head in a recycling bin. (Spoiler: She out ran him.)

“Born in the sunshine of Orlando, refined in the harsh snows of Chicago, always shoving garage-punk into your butt,” reads the Twitter biography of the local trio, Absolutely Not. Donnie writes and records the short, sporadic songs; Jenna’s chocolate gold coin-sized plugs flop around her face as she pounds the drums without pants; Madison plays not one, but two keyboards and accidentally lights an amp on fire mid-set. Garage-punk is definitely being shoved in my butt.

After sneaking past the “stage” of local house-venue Wally’s World, and through a door disguised by a presumably stolen plaque reading “Employees Only,” we venture to an upstairs apartment.

“Are you guys doing blow?” a curious friend with pink pixie bangs asks Jenna and Madison with a cocked eyebrow; I couldn’t tell if she was annoyed or anticipative. “Girl! We’re getting interviewed!” Madison says, while laughing and looking at me with wide eyes. The kitchen was our best bet: relatively quiet, relatively clean, and we could still hear the other bands preforming. The music is nonstop.

Pop ‘stache: Absolutely Not was originally just Donnie. How did it come to be the three of you?

Madison Moore: Donnie started the band in Florida, so I’ve always liked it, but I was just “little sis” and I wasn’t cool enough then. He moved here about four and half years later. I visited a bunch while I was in school, and I was like, “As soon as I graduate I’m moving there and you’re kicking out whoever the fuck you have to kick out of your band, and I’m playing keyboards.” And that’s exactly what happened. Then we actually…

Jenna Horwath: …I’ll tell this part of the story.

JH: My old band was having a going away show, so we asked Donnie and Madison if they wanted to play it. A little while after that, they asked if I wanted to join their band because…

MM: …Because we loved her.

JH: Because their drummer was bad. He was kinda sucky… Anyway, it wasn’t working out.

MM: We fell in love with this bitch.

P’s: Why did you and your brother move to Chicago from Orlando?

MM: He needed a change. Bands, you see them, they go on tour and they just skip Florida. We didn’t get to experience new and cool shit as much. It’s hard to find cool stuff to do there. Once you find it, you’re okay. Unfortunately, I didn’t figure any of this shit out until I was about to leave.

P’s: So why did you pick Chicago?

MM: When Donnie was talking about it, he was just like, “Well California is too expensive. So is New York. A big fucking city that’s not super expensive is Chicago and its got a great music scene.” I came and visited, and I fell in love with it. I was like, “Yeah. Let’s do this.”

P’s: What’s it like being in a band with your brother?

MM: Awesome. We’re like four, five years apart. We didn’t grow up in the same household. Maybe if we did it would be a lot different. We have different moms, same dad, and because of that, we actually weren’t close around our adolescent years. Once we reached higher teens and stuff we became close again, and since then we’ve been best friends.

P’s: Was there any reason you weren’t close? Other than that you didn’t live together?

MM: There’s a lot. There was a lot of rivalry between our parents. There were a lot of issues between all of our parents… Everybody’s divorced, and it wasn’t dealt with in the right way. We shouldn’t have lost touch, but it happened.

P’s: Did you get back in touch on your own terms?

MM: Yeah, totally on our own terms. It wasn’t encouraged, whatsoever.

P’s: Were your parents annoyed by this?

MM: They would never admit that. I think they love it, but at the same time, they’re like, “meh,” because we both have other siblings. We all love each other, so it’s just stupid bullshit. Family, dysfunctional family.

P’s: Jenna, is it weird being in a band with siblings?

JH: They don’t act like they’re brother and sister really. It’s not weird. I get along with both of them really well.

I have an older sister. We’re not the closest, but were not enemies or anything. She’s in Colorado now.When you’re growing up, at least for me, with a sister, you fight and stuff. As you get older, you usually become closer friends, because you’re both adults now. 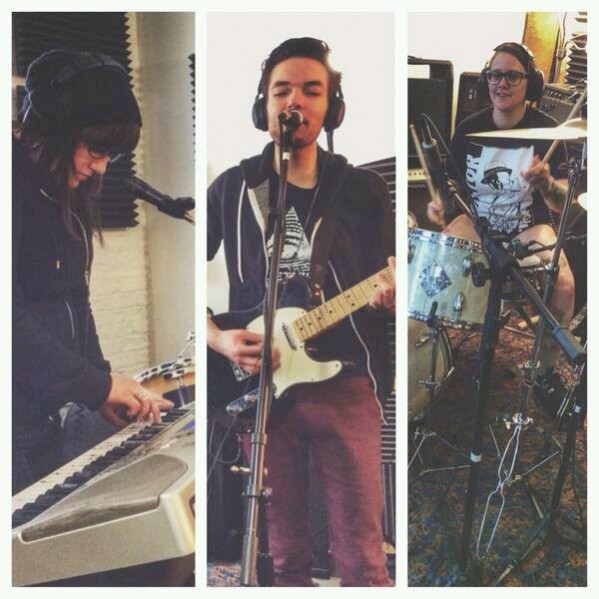 P’s: Would you describe yourselves as feminists?

JH: I’m not one of those feminist-Nazi-asshole bitches. Some people take it too far, and I’m like, this why people don’t like feminists.

MM: I know this is dumb and clichéd, but I always say the same thing about everything: Anything in its extreme is not something I want to be a part of. If you’re an extremist about anything, it’s gonna turn people off, and you’re gonna end up doing the exact opposite of what you’re trying to do. But yeah, I would call myself a feminist, for sure. But I’m not gonna preach and shove it in your face. No thanks.

JH: No thank you.

P’s: What’s your definition of feminism?

MM: Women’s empowerment. Just being proud of your gender.

JH: For me it’s not about being proud. Sometimes I think it’s weird when people are proud of shit, like you can’t help that, why are you proud? It’s weird to me sometimes. So it’s not that you’re proud of it, but you have to have a certain level of strength with it.

P’s: Being a female in the music scene, do you get treated differently?

MM: Yeah, especially Jenna. I think she gets it way more than I do, being a female drummer and being as talented as she is. It’s like, “Whoa I’ve never seen a girl play the drums like that!”

JH: I’ve had people come up and be like, “Oh you’re the best girl drummer I’ve ever seen.”

MM: Why do you have to say girl?

JH: To the kid who said that do me, I said, “Oh thanks man, you’re the best Asian drummer I’ve ever seen. Does that make you feel good? No. It doesn’t.” I mean if that’s how you really feel I guess thanks, but why does it matter? A lot of times, that’s usually the dudes at the bars. It’s just a different community. It’s not that they try to be rude about it, but it’s ignorance. It’s not really their fault, I guess…

P’s: The media usually portrays Absolutely Not as being Donnie Moore, plus two girls. Is this how you’re acknowledged?

MM: Yeah, I mean Donnie writes all the music.

JH: He’s been doing this himself, with other people for a super long time.

MM: We help the songs evolve, but when it comes to the credit on that kind of end, I get it. I mean, he is the front man.

MM: If I was the frontwoman, then it would be the same. He really does do it all.

JH: Plus he’s gay, so he’s basically a girl anyways, am I right? Just kidding. That was total sarcasm.

JH: It’s really funny, because sometimes we joke around like that and people don’t know, and then we get angry emails.

MM: We just have a hard time filtering.

JH: We’re so comfortable with each other and ourselves. There’s no boundaries at all as far as what we say to each other, because it’s funny. People are too uptight about stuff.

MM: Or maybe they just don’t know you.

JH: Or maybe they don’t know me. 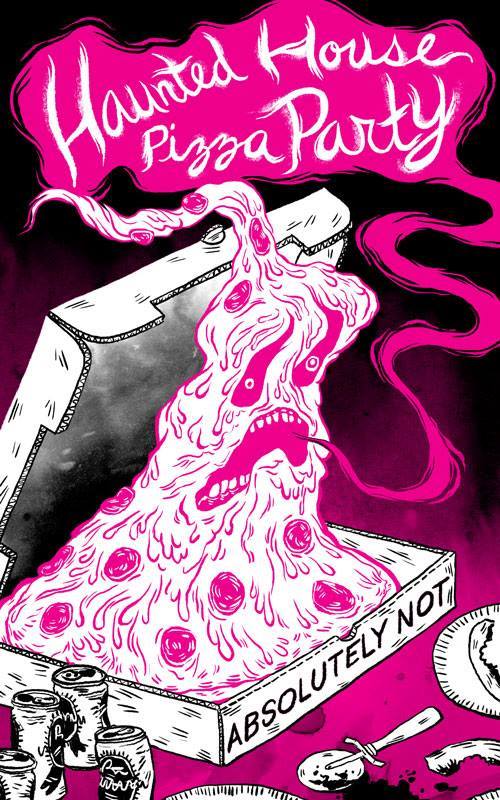 P’s: You have an EP coming out?

MM: Yeah I’m excited. I like it, it just got mastered and it’s being made now. We should have it soon. It’ll be cool.

P’s: How is it different from Mister Something?

MM: Things sound smoother, but we’re screaming a lot. It’s more like we’re giving it to you.

JH: Even since I’ve been in the band–what, two, three years?  It’s already changed so much.

JH: That’s all thanks to me.

P’s: Where did the title Haunted House Pizza Party come From?

MM: I have no idea. Donnie called one of the songs “Haunted House Pizza Party,” and it just went from there.

JH: We say weird stuff a lot, and sometimes they turn into things. “Tee tee” means to go to the bathroom.

MM: “Woo woo” means poop. But that’s usually only when we’re talking to the dog. We have a whole other language when it comes to the dog.