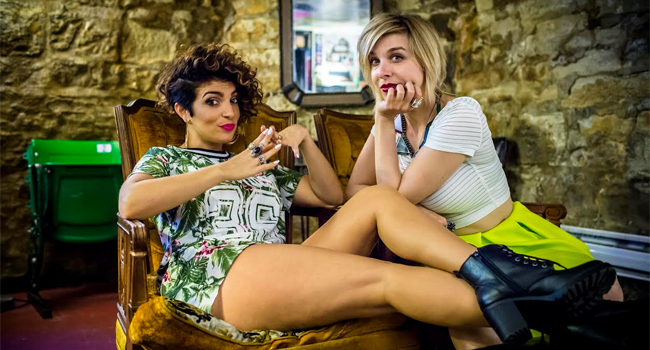 After self-releasing its self-titled EP in March, Celine Neon, composed of visionary artists Maggie Kubley and Emily Nejad, is becoming known around Chicago for incredible harmonies, irresistible hooks, energizing live shows, and intricate music videos. Celine Neon is chameleonic in its style, from collaborations with Chicago artists like ShowYouSuck and Rapper Chicks, to electrifying party anthems, to the bare bones, soulful acapella cover of Elliphant and MØ’s friendship anthem “One More.” Celine Neon’s second EP, Kitty, will be released next month.

Pop ’stache spoke to Nejad and Kubley the afternoon before their show at the dad-centric beauty pageant Dad Bod Fest.

Pop ’stache: How do you balance managing yourselves while also writing, performing, and planning all your shows and music videos?

Maggie Kubley: You know, I’ve heard of these things people have that we have to forgo in order to have this band, and they’re called hobbies—

Emily Nejad: I’ve heard of those.

MK: Yeah, hobbies. Free time is another thing I’ve heard of. We just kind of set those things aside to do this, because it’s our passion.

EN: We’re trying to work towards something so that we don’t have to have a day job, so I can just sing and dance and wear costumes on stage and hang out with my BFF, and that’s it.

P ’s: Independence and freedom are themes that come up a lot in your songs. On a similar note, how does feminism play into both the band and the future you want to build for yourselves, professionally and personally?

EN: I think a lot of that comes with age, too. I’m 29 now, and the difference between 26 and 29 and my ability to make excuses for poor male behavior—I have none. I can’t make excuses for poor behavior anymore. There’s a big switch that happens from your mid-20’s to late-20’s, almost overnight, when you realize, “Oh, I’m not here for anyone’s bullshit anymore, so if you’re going to come to me, you better come correct.”

P ’s: How do you feel like the band has reinforced those ideas of being true to who you are?

MK: I think we are really conscious of the images and the messages that we put out. I’m definitely somebody who, like everybody, struggles with being true to myself. I struggle with being insecure, and wanting to pander to men for their love and affection.

But the great thing about making art and being a performer is that you can be the best version of yourself, and you can lead by example.

EN: My journey with Celine Neon has definitely less to do with boys, because I’ve always been kind of mean to boys. But I spent a really long time trying to find anything else to do rather than be an artist, rather than be a singer. I thought of every kind of escape to try to avoid doing the scary thing that I’m doing now.

Celine Neon, for me, is me finally saying, “No, this is what I want.” This, exactly this. We have created specifically the thing that we wanted, and we are in control of it. We don’t have anybody else telling us what to do with it. We’re gonna push this as far as it can possibly go. I don’t really care if it’s not cool or if other people think it’s stupid to dance in a costume on stage. It’s like, “Fuck you, this is the thing that I want, and that’s it.”

P ’s: Something I really love about Celine Neon is how your voices are both so different on their own but complement each other so well.

EN: I think on our own, Maggie and I have very different vocal preferences and style. I like a beautiful, jazzy vocal, one that covers you and makes you feel good, and Maggie—

MK: I like a whisky-soaked, gritty, Steven Tyler kind of sound.

P ’s: Can you talk a little bit about your upcoming EP, Kitty?

EN: Our first EP was kind of dark and gritty, and this one comes into the light a little bit more.

MK: The instrumentation alone on this EP is very different. Will [Kubley, Maggie’s brother and the producer for Celine Neon] used a lot of really neat found sounds that he recorded from all over the world, so about 80 percent of the sounds on the EP are custom made. And I think because they are songs that are from the world, you get a very bright, rich, lively sound and feeling from this EP, where our previous songs seem like they were made in a dingy, dark, kind of basement place because they were all created on a computer. These sounds were created from people and voices, and so these songs have more of a celebratory feel. You’re still going to get the real gritty lyrical content, but even that, on certain tunes, has changed…Some are actually straight-up positive.

P ’s: Is that shift in tone weird for you?

MK: It is really weird, yeah. We just finished recording it this past weekend, and sometimes singing it, I was like, “Wow, I can’t believe I wrote that.” It’s so happy. But like I said before, we take very seriously the content we put out into the world. I listen to a lot of rap, and I understand that many rappers pay homage to the genre by using those classic lyrics that are crazy misogynistic.

Just like a lot of our work slights men, a bit, but it also acknowledges that, like—

MK: Right! We love men, we need men in our lives, but it also slights them a little bit. It walks that line. I just had this conversation with someone about The Weeknd’s new album. When I’m hearing songs about treating women like dogs, essentially, it’s like, “I’ve heard this. Find something else to say about me, and I’ll give you more of my money.”

It’s hard, because I identify as a feminist, but I strive every day to be a humanist and get everybody on equal levels. But although I think it is is cheesy to say really positive things, I also think it’s really important to say positive things. And, from a business standpoint, people like positive music! When you sing and read Katy Perry’s “Firework,” you’re like, “This is cheeseball to the max,” but people love it.

EN: And I love it! I also don’t like listening to music that is about being miserable or sad, at all, ever. I never listen to sad music in my life. But I understand why people do.

MK: If I’m in a bad moment then I want bad music so I can just let it all out. Our first EP is actually really sad, but it has such infectious beats that it makes you feel like, “Yeah, I am sad, I am depressed, but fuck it, I’m still out here grinding.”

When you’re depressed, or struggling with addiction or mental illness, one of the biggest things you feel is that you are fucking alone and that no one wants to fuck with you.

You’re an outcast, and you’re isolated, nobody understands you, and you can’t tell anyone. But when you say it out loud, it lets everyone know that we are all struggling with this. It’s like, “You feel this way? Guess what, I feel that way too. You don’t know what to say about it? Guess what, I was given a god-given talent to say shit about this, so I’m going to say it. Cling to that. Let’s do it together.” It takes away the stigma.

Celine Neon released a brand-new remix of their song “Plz Party” with rapper ShowYouSuck on October 7 (below). Their sophomore EP Kitty is slated for release on November 13 (via Kujad Records, Celine Neon’s own label imprint). The upcoming lead single, also titled “Kitty,” will premiere later this season along with a very colorful video.