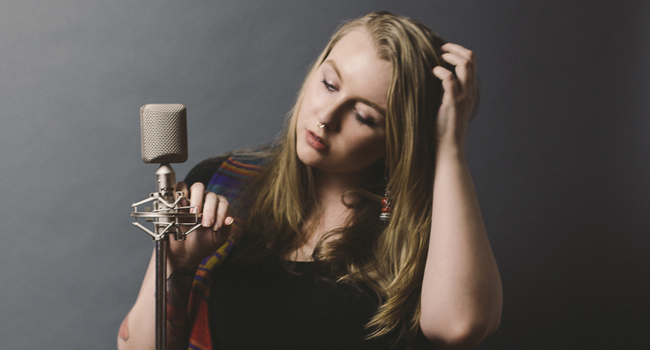 Lili K, who has performed at large festivals like SXSW and Lollapalooza, on stages with Chance The Rapper and R. Kelly, doesn’t usually get nervous before shows—but she said that prior to her show last month at the Metro, she had butterflies in her stomach the entire day.

“I think it was because it was the first time I’d had so much press leading up to a show, so I knew people were going to be there because they had read about me,” she said. “It was a great show, it was a lot of fun, but all day, I was so nervous.”

Recently featured as one of RedEye‘s 15 Chicago Artists to Watch, it seems like almost everyone is talking about 23-year-old jazz singer Lili K lately, and with good reason. After years releasing EPs and performing on collaborations with other musicians, she will finally be releasing her first full, totally self-produced album, Ruby, on April 21 with The Lili K Band, putting her soulful, powerful voice and songwriting chops front and center.

“This album is really what I want to do,” Lili says.

“It’s my full vision, not half my vision, half somebody else’s. It means so much more to me—but that means it’s also so much more pressure on me.”

Lili K spoke with Pop ‘stache over coffee about the thrill of live performances, why she enjoys being her own manager, and the challenges of making music that isn’t “mainstream.”

P ’s: How long has your new album been in the works?

LK: Some of the songs on the album have been written for about five years. I’d been doing them at shows, but I’d never recorded them. Other songs I wrote for the album and we recorded it in June of 2014. I went back over the rest of the summer months and made a vocal tweak here or there, but we didn’t want to focus on making things too perfect. We really wanted to let the flaws and the personality be there. That’s one of my favorite things in vintage recordings: when you hear other sounds like the tape reel running out, or talking, or a piano creak. I kept a bunch of stuff like that in there, so it’s not this super polished, perfect album. It has its little mishaps in it.

P ’s: Is that what you enjoy about performing live – capturing things that are sometimes unexpected or imperfect?

LK: Yes. Yes. My favorite thing about performing is creating something that will never be created again exactly that same way. My favorite part of performing is being able to create a once-in-a-lifetime experience. I love having my bass player on stage with me, making inside jokes between my keyboard player—when he plays a funny lick and only we know what it means – I love it.

There will be times at shows when I’ll just forget lyrics and I’ll scat instead. Or if I’m really tired because I’ve been running around, I’ll call out a solo so I can breathe. That’s my cheat code, when it comes to live shows: “I’m going to place a solo here, here, and here, because I know I’m going to need to take a break at these points.”

P ’s: What was your relationship to music when you were growing up?

My mom played a lot of Motown, Steely Dan, classic rock around the house, and I fell into gospel and spirituals through my music teachers at school when I was around eight years old. We did a lot of traditional African-American spirituals. “Joshua Fit the Battle of Jericho” was one of my first solos.

Something that really drew me to music in general was the spirituality and power  in gospel songs. When I was in church I could see the spirituality in the music and how it made people feel. That was crazy to me. Seeing the power of music at such a young age is what really locked me in. 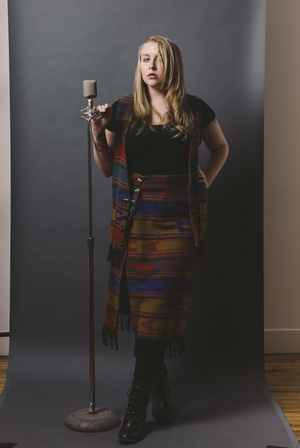 P ’s: Had you always been singing?

LK: Kind of, for fun. I was way more into sports when I was little. I was a tomboy. When I was in middle school, my mom and I moved to Milwaukee and I got into Roosevelt Middle School of the Arts. It was a public school, but you had to audition to get in. We kind of begged our way in. I sang for the principal in an office.

That’s where I was introduced to jazz for the first time, and that changed everything. I don’t have a gospel voice, a big, soulful voice. I have a jazz voice. When I finally heard Ella Fitzgerald, I had this moment: “Oh! This exists! This makes sense to me!” It cemented my confidence and the idea that jazz was something I could do.

So I kept doing it. Being at an arts school, you’re surrounded by so much talent and so much support. All my friends were phenomenal singers, string players, band members, and that always motivated me—not only to be better at my craft, but to be supportive of artists in general. I think that sense of community is something I’ve carried over into my work now. It’s not about competition in music. There’s room for all of the good musicians.

P ’s: Did you pursue music in college?

LK: I didn’t go to college for performance. I went to Columbia College and it was an accident that I went there. I originally wanted to go to University of Miami. I had sent in my deposit, I was ready to go—but then Columbia gave me a scholarship and I majored in music business. I think it happened for a reason, for sure.

In college I learned to write my own press releases, read my own contracts, how to manage myself, basically. Once I got to my junior year I was pretty much doing everything that I was learning already. There were some great teachers and great things I learned at Columbia, but I think the most I got out of it was learning about the legal side of music business. I’m glad I did that.

I’m self-managed now. I do think a manager can help an artist’s career, but it has to be a perfect fit; everyone has to be on the same page. I have a very specific goal of what I want with my art and with my career, and until I find the manager who really is the perfect fit for that, I think it’s best to handle it myself. It’s more work for me, but I’m a bit of a control freak, so I’m okay with that.

P ’s: You have such a specific kind of style—musically, aesthetically—and project so much confidence. It’s exciting to see that kind of confidence in a younger woman who is just starting out—

LK: All about the feminism!

P ’s: Have you always been this confident and driven, so sure of your vision?

LK: My mom raised me. She and my dad got a divorce when I was really young. My dad lived across the country, so it was pretty much just me and my mom growing up. Seeing her independence, and watching her go through so much, definitely instilled this “I’m a woman, hear me roar!” type of attitude in me. She really instilled in me a confidence and ability to be comfortable with myself at an early age.

Of course, as with anybody, we all have our doubts, and our self-confidence issues. We all struggle with that, and I think I always will. But you realize, “This is who I am. If people don’t like it, they don’t like it, and I don’t need them to like it.” It’s the same with music. I don’t make music to be popular, or to be famous. I make music because I want to make it. Yeah, I’d love to make a living off of it—and if you love my music, awesome! Let’s love it together! But I’ve turned down deals offering lots of money but that would require me to sing pop music and wear less clothing because I know that’s not what I want.

If I’m doing music for any other reason besides my happiness and my love for it, I’m not doing it for the right reasons.

P ’s: What are you most looking forward to about people hearing this new album?

LK: I think the album really shows my true love for music and musicianship. I love that I was able to record with all live instrumentation, and with such amazing musicians that I admire so much. I look up to everybody who is in my band. It’s not like they are just backing me; we are a unit. It’s really cool to have been able to do that. It even makes performing more special because it’s not just my project, it’s our project.

P ’s: What’s next for you? What are some things you really want to do?

LK: I’d like to do a lot of jazz festivals. Not only with original music, but full on jazz sets, like an Ella tribute or something like that. I really want to get more into the jazz world. It’s a big goal of mine. As well as, you know, tour Europe!

I haven’t done my own tour yet, either. I’ve been on a few tour dates with Chance, and I’ve done shows in Chicago and Milwaukee, but I haven’t done a full tour. We’re trying to set up a tour for this album, which takes a lot of planning when you’re completely independent and arranging all of it yourself. We’re working on setting up some things for the summer, so I’m hoping that works out.

P ’s: What has been your biggest challenge so far in making music, especially as someone younger trying to break into the scene ?

LK: I don’t think I have to work harder because of my age. A lot of the newest hip hop acts are really young, they’re younger than me. The hardest part is that my genres aren’t mainstream. They’re not popular. There are for sure fanbases, but it’s not the kind of music that is really supported by blog culture, necessarily, or even radio a lot of the time.

So the challenge I face is, how do I reach my fans? That’s the biggest mystery. How do I reach the people who listen to this music, especially when I’m not on a label and I don’t have major distribution? I think that’s the biggest struggle for me right now, really figuring out how to get my music out there the right way.