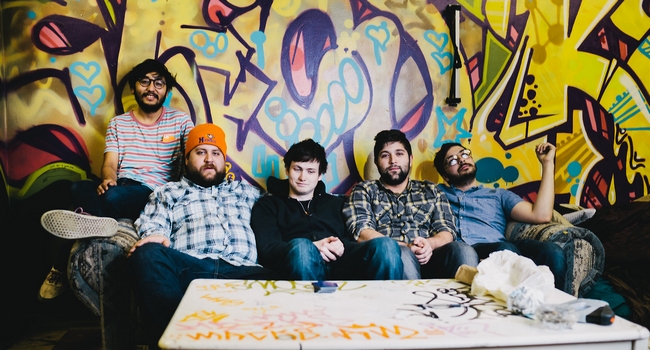 St. Louis quintet Foxing released its debut full-length, The Albatross, in November, garnering an enthusiastic, four-’stache review. In anticipation of the band’s show at Township on Feb. 21, Pop ‘stache spoke to singer Conor Murphy and bassist Josh Coll about the personal aspects of the album that make it resonate with fans.

Pop ‘stache: What do you think of the “emo revival” label and having it placed on you?

Josh Coll: The thing is, people are going to put us into whatever category they want to. For me, it’s really not a big deal. And as far as the emo revival as a whole goes, I don’t think emo music ever went away. I think more mainstream crap just started to pick up on it, but I can’t remember a time in my life when I felt like emo music was gone. 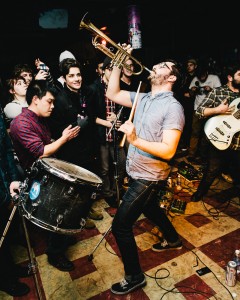 Conor Murphy: It’s hard for me, because I don’t know exactly what emo is. Whenever people tell me about emo bands, it’s such a wide variety of music for me that I’m like, “What the fuck is that, even? What does that even mean?”

JC: I don’t think anybody would call us an emo band. There are like five or six tags that they want to throw at us. I don’t have a problem with it, because I think people try to compartmentalize things as much as they can, but like Conor was saying, what is emo? Is it an aesthetic, or is it content? Aesthetically, if we’re an emo band, I guess I don’t really agree with it, but I don’t have a problem with people calling us that, as long as it’s not calling us that to dismiss us.

P ‘s: Can you tell me about the ocean and water imagery on The Albatross?

JC: Probably the most surface level—the reason why I added it a lot—I grew up on the west coast and I grew up around the ocean. There’s a lot of imagery, or maybe subtext, in the record about the idea of home and what makes a place your home, and coming back to a place after a long time hoping that you will have that security of home and it not being there.

On another level, I think the oceanic imagery is about distance; it’s about isolation and loneliness and the idea of this vastness… The further you get out there, the more you are at the mercy of nature. I think that’s a little bit of it.

CM: Josh and I each write half the lyrics, so we had to establish themes through what was in common between both of us. I studied abroad in London the semester before we recorded that record, and Josh had returned from being overseas, as well.

We were kind of on the same page as far as returning home and home not being the way that we left it. It’s home not feeling as good as we thought it did.

JC: When you talk about the oceanic imagery, are you also speaking about The Albatross as a whole, like the title of the record and what it’s based on?

JC: When Conor was gone—we had started a band and then Conor left while we were writing—we had a lot of members leave and whatnot, and I was trying to keep everything together. I was getting very overwhelmed, because I was like, “I’m getting a little bit older and this’ll probably be the last [band] that I do before maybe I give up music.” So I retreated to California to clear my head. When I got back there, there was no comfort, I guess, in coming home.

So as far as what The Albatross is about, as a whole, it’s just kind of self-perpetuated bad luck… I think a lot of people, when they go through rough patches, they want to externalize it and look outward and try to blame it on any number of things that are going wrong, but a lot of times, I don’t think they look inward; they don’t think, “Maybe I’m doing this to myself.” It’s kind of the idea of wearing your imperfections.

P ‘s: When you started writing The Albatross, were you at the point where you were externalizing your problems, or were you past it by then?

JC: I think I was in the thick of making those bad decisions. When I came home, I made a lot of really, really bad decisions and I hurt a lot of my friends, and I just did a lot of things that I look back at and am absolutely appalled with.

The only turning point in the album for me was—there were two songs, which were the last songs that we wrote for the album, “Bit by a Dead Bee” part one and two. I think those two songs were the first and only time in the record where I was actually coming to terms with what was going on. I think throughout the album, there is a lot of denial of that or displacement of blame or self-deprecation.

A lot of the parts that I wrote… are an inside perspective of myself, basically wrestling with that side of myself.

CM: The entire time, I was undoubtedly blaming outside forces for my own problems. But strangely enough, when writing lyrics, I don’t really think about what I’m writing. I like letting ideas kinda flow freely, and a lot of what came out of that for me was realizing that they were all things brought upon ourselves, rather than those outside forces that I was blaming.

P ‘s: What’s an example of those problems coming through in the album?

JC: The song “Quietus,” the last song on the record, is a song about perspectives. That song is heavily about what I was putting my significant other through when I was leaving, when I left to go back to California. I  just picked up and bought a plane ticket, and a week later I was gone, and I didn’t know when I was coming back. I just left. A lot of that is from her perspective. It’s about me and my own inability to commit, or to accept happiness and love from somebody who is 100 percent willing to give me all of herself. Just the idea of somebody leaving and looking for contentment when contentment is right there.

CM: The most notable one for me would be on “The Medic.” When I got back from London, I was dating somebody—I had broken up with them when I went to London, then got back together with them while I was over there—and then when I got home, it just didn’t work out in any way. Even though I was horrible, we had a horrible relationship, I was still like, “Well, we have to find someone, so why not just let it be each other even though this is a terrible idea?”

JC: I’m wary to describe the actual situations that these songs are about, because I think it’s good for people to be able to listen to them and interpret them in their own lives. It is interesting with his interpretation of “The Medic,” because for me, it’s about the idea of being this train wreck of a person and involved with a person who is also not stable, and there being that willingness to change for them simply because at that time, you need to be with somebody. You’re willing to forgo your own interests or your own self-destructiveness, basically, for another form of self-destructiveness, which is a co-dependent relationship.

P ‘s: Josh, earlier you kind of glazed over the fact that you expect to quit making music eventually. Why is that?

JC: The thing is, there’s a time stamp on everything. All things go away. That’s always been a huge motivator for me instead of something to be downtrodden about. For me, it’s like, “The band is not going to be around forever, so let’s make it the best that we can and not half-ass anything.” That goes down to literally every aspect of the band. We don’t half-ass anything because there’s no point in half-assing it.

CM: By the time we break up, it goes without saying for all of us that we want it to be at a point where it’s like, “Yeah, we should totally break up now,” not, “We’re all sick of each other and we hate playing music.”

Like a good professional athlete, you don’t just drag on the lifespan of your career until it’s totally washed up. You want to bow out with some kind of grace.

JC: We never started this band because… we’re not entitled in any way. First off, we didn’t think anybody would care about this record. We’re very humble, I guess, in our aspirations. But there does come a point in everybody’s lives when you want some affirmation that what you’re doing is not just a hobby. We’ve had a lot of people contact us saying that The Albatross got them through really rough times in their lives, and that is an extremely affirming thing for why you’re making music.