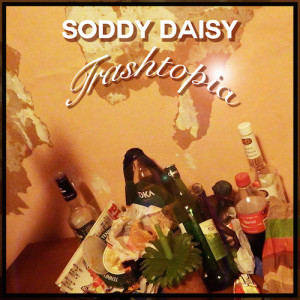 Soddy Daisy’s Facebook description wrote that their genres include space, whiskey, Mexican jumping beans, and “partytimes.” If this makes no sense to you either, that’s good, because it shouldn’t. Soddy Daisy’s whole aesthetic, from their self-proclaimed descriptions to their debut LP Trashtopia’s album cover of garbage and booze, is a bundle of randomness. But they execute unpredictability well. They offer energetic garage rock songs by a group of musicians who love to play music, and take themselves seriously, but not too seriously.

Musical throwbacks fill Trashtopia, like a few surf-rock riffs and doo-wop gems, which are usually topped off with sassy vocals from Maureen Neer. But Soddy Daisy is never one thing. In “Go!” they take a page from the ’77 punk scene, with fast paced guitars and a catchy hook where all the band members sing along. The purposeful lo-fi recording quality overshadows Neer’s striking, throaty vocal quality. Luckily, the rest of Trashtopia doesn’t pan out that way.

“When the High Subsides” sounds strongly reminiscent of an early Stooges song. A heavy, foreboding guitar progression matches the simple but booming drumbeat to create something special. Bass player Joey Eichler sings as ominously as the music itself, “Four in the morning and I’m shaking at the end of the world, girl/All dressed up and no place else to go.” Juxtaposed to how Trashtopia kicked off, “When the High Subsides” sounds like it came from a completely different band.

Although Soddy Daisy can get moody or dark for a moment, they’re at their best in Trashtopia when they fall into their sweet, sweet surf rock pocket. Their peers Shannon and the Clams are doing a similar thing with their music, but Soddy Daisy throws in a bit more aggression and modernity. Trashtopia’s doo-wop songs don’t sound like they came straight out of the ‘50s and ‘60s.

For a debut album, Soddy Daisy already has a solid grasp as to what they want to sound like. Though unpredictable, Trashtopia never feels disjointed; it’s a linear album filled with strong, well-written songs and accomplished musicianship. Soddy Daisy can name their albums whatever they want, but no matter how ridiculous a title may be, it’ll never hide the fact that they’re actually really great at what they do.