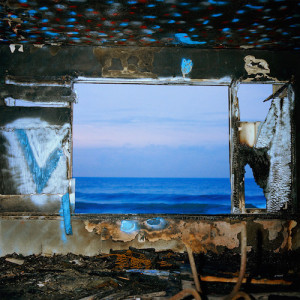 Dream pop and shoegaze music have infiltrated indie music recently. With veteran bands like Slowdive and My Bloody Valentine reuniting, along with the success of more recent bands like Beach House and No Joy, the dream isn’t over. The psychedelic band Deerhunter from Atlanta, GA is back with Fading Frontier, an effortlessly chill return to their genre. Free from any hiccups between tracks, Fading Frontier glimpses into singer and songwriter Bradford Cox’s kaleidoscope-like musical mind.

Likewise, it’s hard to pinpoint the main theme of Fading Frontier, but maybe this is irrelevant to Cox’s stream-of-consciousness writing process. Many of the songs can come off as both erratic and soothing. For instance, “Take Care” starts with a simple melody, but then turns into chaos by the end of the track when drums, guitars, synths, and bass crash into each other and cathartically blooming into a psychedelic and free-form soundscape. And this is emblematic of Cox’s ability to meld seemingly disjointed ideas and birthing a song whose sounds feel like they were meant for each other.

Though Cox’s writing can come off as amorphous, it doesn’t mean he writes frivolously. In “Living My Life,” the band chants the title throughout it, as if Cox wrote it as a mantra to himself. As uplifting as the phrase “I’m living my life” sounds, Cox touches on the darkest parts of his thoughts, especially when he sings, “Will you tell me when you find out/To recover the lost years/I’ve spend all of my time out here/Chasing the fading frontier.” Identifying disappointment within oneself is incredibly hard to admit, and yet Cox articulated it to a T.

Cox wrote Fading Frontier out of the depression that followed a nearly fatal car accident in December 2014. Cox said he, “felt no interest in anything else.” He clearly alludes to this experience in “Breaker,” especially when he sings, “Jack-knifed on the side-street crossing/I’m still alive and that’s something.” That last line is quite hopeful, but when the song begins, we’re allowed to peak into the darkness that initially consumed Cox when he sings, “Breaking the waves again, and though I tried/The ocean is strong, I cannot stem the tide.”

Fading Frontier is fit for sprawling yourself on the floor of your bedroom and thinking about everything. In fact, perhaps just as writing this record was for Cox, the album forces you to meditate on life.

It is not fit for background noise while you work your day job; it will compel you to think about yourself, why work may suck, and it may put you through a reassessment.

Fading Frontier is a fascinating glimpse into Cox’s mind and a clear picture of expert musicianship. It’s always an invigorating experience when an album, such as Fading Frontier, grabs your attention and makes you stop and think. Your face is coerced out of the blob of technology in front of you, and you remember that there are still some great things out there crafted with heart and soul.