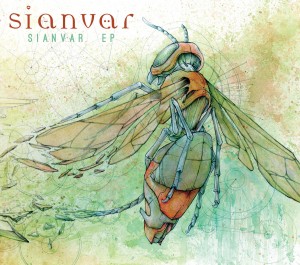 Usually, receiving word of a new supergroup carries with it the expectation that the nascent collaboration will blend the talents of each of its members.

With the release of Sianvar’s self-titled EP, listeners are given a 5-song trek into disappointingly familiar territory.

But if you ignore the high expectations set for a so-called  supergroup, the tracks do present moments of artistic license in which the players opt to keep things interesting, veering into less formulaic lands rather than letting the music lavish in the doldrums of the over-populated prog/post-hardcore genre.

It’s a tired subheading, to be sure, and one in which many acts choose to only graze the bar set for innovation. Sianvar does well in separating itself from the usual chaff.

The busy technicality that guitarist Will Swan brings to Dance Gavin Dance (his well known nü-screamo outfit) is clearly transmuted into the cascading licks that populate much of this EP.

Swan’s playing clasps hands pleasingly with Sergio Medina, whose contributions as second guitar may actually be responsible for many of the more alluring chord changes and tender tonalities heard on this EP–based on the treatment of his primary project, Stolas.

The rhythm section, consisting of Joe Arrington on drums and Michael Littlefield on bass–both transplants from A Lot Like Birds (a slightly more metal-core minded and fast-paced branding of post-hardcore, featuring sporadic moments of ambiance and varied instrumentation that are uncharacteristic of the genre)–may be the motivating force in coaxing the major tenets of Sianvar’s sound into the genre-melding, spastic prog-realm it inhabits—when it decides to settle anywhere at all, that is.

The addition of Hail the Sun vocalist Donovan Melero adds suitable dynamic to the arrangements. He’s able to emit mostly believable guttural voicings and swing on a dime to a pretty, though sometimes nasally, falsetto.

With a hat tip to the tendencies of top-tier experimenters like The Mars Volta or Refused, many of the stylistic choices on the EP are enticingly erratic and well executed, considering that they flirt so overtly with being too busy to give the audience any substantial foothold.

Save for the requisite dancey bits of a song like “Your Tongue Ties,” much of the riffage featured on this release excels at giving the tunes a feeling of movement.

Whether nodding along with the loose, sweeping arpeggiation of “Chest Pressure,” the opening and most balanced track on Sianvar, or tapping in time with the attractively subdivided components of “Sick Machine,” the groove that Sianvar lands in most often is ridden satisfactorily.

The group succeeds in piecing together a sound that allows for a Russian roulette caliber of randomness, but usually finds its way back to the beaten path. Perhaps a more tasteful choice for this initial release would have been for the players to adopt a slightly more controlled approach in order to steer the music into the weirdo, slack-metal territory of millennial, progressively dissonant bands like The Fall of Troy or The Dillinger Escape Plan, both of which can be heard to varying extents beneath the parts of this release that feature real bite.

It seems that the intended audience and the track records of the band members weighed more heavily than they should have on the creative process.

Sianvar does offer significantly more range of musical vocabulary than many acts in its peer group through its less formatted song structuring and aptly cherry-picked influences (stretching back to late ’90s/early ’00s alternative innovators like At the Drive-In or Cave In), but the winning moments are edged to the sidelines more often than not by compressed production and a vocal heavy mix.

Certain aspects of Sianvar bolster and detract from its final product simultaneously. Generally, its shifting motif serves to deprive listeners of context. But it’s that same relentless action that, when pulled off, sets Sianvar apart from its contemporaries, an important quality considering that many in-vogue post-hardcore releases only cloud the already polluted waters of modern screamo-chic.

Sianvar writhes and wriggles as you try to pin it down, both ends pulling in different directions, like a two headed snake. That elusive quality just might be the key to this side project’s success.