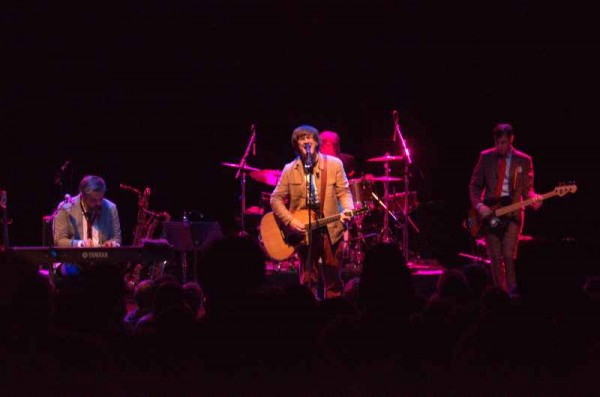 There was a man I loved very much, and when we first started dating we lived on opposite sides of the city. We spent a lot of time in his car, driving back and forth between our respective apartments. The route between us involved a stretch of Congress Parkway between 290 and Lake Shore Drive. Every time we drove that stretch, we played a silent game, hoping that maybe one day, we could beat all of the traffic lights on Congress. We got close many times, but were always beaten by the lights. We had music on in the car, everything from Notorious BIG to Kings of Leon, but what I remember best is listening to the Mountain Goats.

Something in John Darnielle’s voice captured everything I felt in that moment: youthful recklessness, the sensation that I never wanted to get out of that car but knowing I’d have to, the pain that came from wondering how long the man operating the stick shift next to me would let me love him as if the sun rose and set with him—the whole stupid love thing.

The Mountain Goats have always had the ability to trace along the essence of the human experience and land on the center that cannot hold.

More recently, The Mountain Goats’ focus has been on, of all things, professional wrestling, with the recently released concept album Beat the Champ—specifically, a relatively obscure depiction of the territorial heyday of professional wrestling, just before commercial consolidation in the ’80s. The likelihood that the sort of person who loves the Mountain Goats is also the sort of person who loves professional wrestling is slim, a fact that hasn’t escaped the band. Darnielle said as much on stage at the Vic Theater with bassist Peter Hughes, drummer Jon Worsted, and a sublime multi-instrumentalist by his side.

The foursome was introduced by an audio recording of the famous Dusty Rhodes speech about “hard times,” and they opened with “Stabbed to Death Outside San Juan” from Beat the Champ. As expected, the set focused on this most recent release, occasionally intercut with fan favorites from Transcendental Youth and Tallahassee and stories about, you guessed it, professional wrestling. A hilarious, detailed explanation of a heel turn preceded “Heel Turn 2,” and these moments of levity offset the generally less-than-lighthearted tone of the Mountain Goats’ canon.

When introducing “Song for my Stepfather,” Darnielle confessed, “I don’t play this often,” and noted that it was a pretty intimate moment. He suggested the audience think, “Hey, maybe I won’t point my phone at him.” The crowd obliged with reverence. The Mountain Goats were greeted with appropriate silence and enthusiastically shouted lyrics in equal measure. It felt like heart of every person in the room was about to explode out of their chests, and the band looked like they were having the time of their lives. Hughes and Darnielle danced and played at each other with abandon, and on occasion, a smile would break across Darnielle’s face when he could hear the crowd singing with him, as though he was surprised the people who came to his sold-out show knew the words.

It was a beautiful symbiotic relationship, the hoard of fans at the Vic Theater giving everything they had, and the band giving it right back with utmost sincerity.

The Mountain Goats played not one, but two encores that night, the second of which included the opening act, the delightful Stephen Brodsky (Cave In/Mutoid Man). Danielle introduced the second encore with, “There’s probably two songs everyone in this room wanted to hear tonight, and we’re gonna play them both.” And when I heard those songs (which, for the sake of avoiding spoilers, I won’t tell you), I think what I felt was something like how I would have felt if we had ever beaten every light on Congress.

Far better, more learned people than I have mused on the transcendent power of music—how it defies time and space, how it sparks in your brain like a smell from childhood—and how live music is just so darn great and special. Despite my best intentions, I am just a silly fan, clearly biased, emotionally attached, an uncritical critic, but I am not ashamed of this. There’s something about shouting, “I hope you die/I hope we both die” into a stranger’s face as they shout it right back that warrants an existential shift. I would be lying if I did not confess that something in that moment reminded me that through all of the shit and the red lights and the people you don’t see as often as you’d like anymore, it can all feel okay again with just a few chords and some lines from a man with a goofy voice—that one day you can beat the lights on Congress.