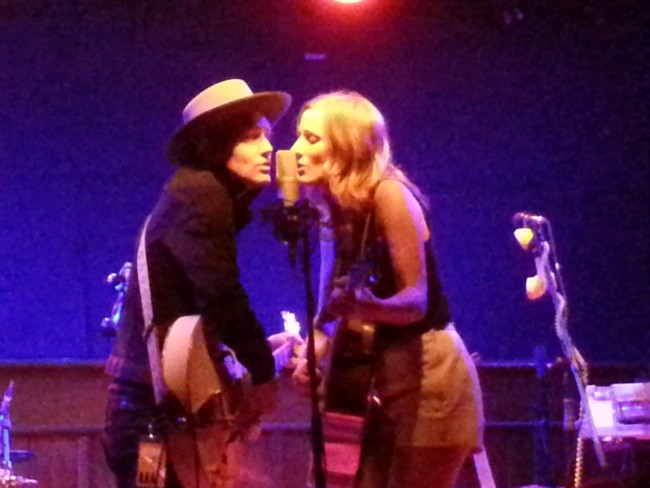 Listening to Whitehorse’s newest record, Leave No Bridge Unburned, released in February by Six Shooter Records, one might assume there’s at least four or five or heck, maybe even six of them. The reality is, Whitehorse is just a Canadian husband-and-wife duo, composed of Luke Doucet and Melissa McClelland, a fact impossible to understand until you see them live.

Although every song is different (thankfully), Doucet starts many of their live numbers by playing a pattern on their drum set, records that rhythm, and loops it during the song to accompany their singing and playing.  Once the rhythm is going, Doucet has plenty of space in which to fill his guitar wizardry and plaintive if plain-spoken Western-folksy tenor vocals and McClelland’s soulful and affecting jazz-club alto, mixed in with her pluckish electric bass lines. The two kept their tour manager/guitar tech busy with frequent string swapping between songs and moved about quite a bit between a shared microphone at center stage and “his and hers” mics, supplemented with what appeared to be actual telephone mouthpieces, through which they were able to channel some especially “old-timey,” and in some cases downright haunting, vocal effects.  Similar effects have been produced by megaphones (R.E.M.) and CB radio microphones (Butthole Surfers), but on this night they were able to channel Joy Division a la She Wants Revenge on some numbers and/or Billie Holiday echolalia on others.

Whitehorse began the night on a high note with the one-two punch of “You Get Older” and “Baby What’s Wrong?” from their latest record.  While today’s modern-day categorization fetishes describe Whitehorse as folk-rock, it’s easy to imagine them blanching at such a description.

Just like the far-flung Western town in the Yukon from where they derive their moniker, the sound of Whitehorse is more like the sound of the Old West.

The twosome artfully melds the clear inspirations of “spaghetti western” soundtracks with the blues, Doucet’s impressive guitar licks and McClelland’s sultry, yet never showy, vocals.  The only way this music could be called “folk” might be that some of the subject matter and lyrics draw from the folk tradition–  it’s easy to imagine “You Get Older” or “Devil’s Got A Gun” from their full-length debut, 2012’s The Fate Of The World Depends On This Kiss as coming from a Bob Dylan record. They did, in fact, cover Dylan’s “It Ain’t Me Babe” for an earlier EP of covers.

Another highlight of the set was their version of “Big Boss Man,” originally recorded by Jimmy Reed.  Up next was “Broken” from their debut EP, released in 2011, featuring the memorable lines, “You’ve got to have a heart to have a broken one” and when fighting over who gets which records, “You take Let It Bleed, I want Blood On The Tracks.”

Before launching into “Tame As The Wild Ones,” Doucet described their first time working with a producer, Gus van Go as a great experience aside from him telling them they had to rewrite all their songs, and he told him that one thing missing from the record was something “sexy.”  So as he recounted in his introduction, he and van Go went out for some beers and McClelland stayed home and wrote “Tame” as their “sexy song.”

Proof positive that it worked, he said, is that they’re now touring with their new baby in tow.

Sure enough, “Tame As The Wild Ones” was the most sultry and sexy moment of the night.

Throughout their exuberant performance, Whitehorse kept up a blistering pace, pausing only to switch instruments and get a drumbeat going, although they did take a few requests from the enraptured crowd, “Emerald Isle” and the slow-burning “Achilles Desire” from their earlier recordings.  They concluded their set with the stellar rocker “Downtown” from Leave No Bridge Unburned and returned to the stage for an astounding encore of Tom Waits’ “Gun Street Girl.”

The only quibble with their set was it could have featured more from the new record, but they clearly made the most of the time they were allotted–  it was an early show and they had to pull their many plugs before the next show started.  Whitehorse is clearly an act that is up-and-coming and deserves additional attention, not just for their great recent record but for their awesome live show too.  Here’s hoping next time they come to town they can play a longer set and feature some of the other captivating highlights from Leave No Bridge Unburned.

Check out the Setlist and upcoming tour dates.