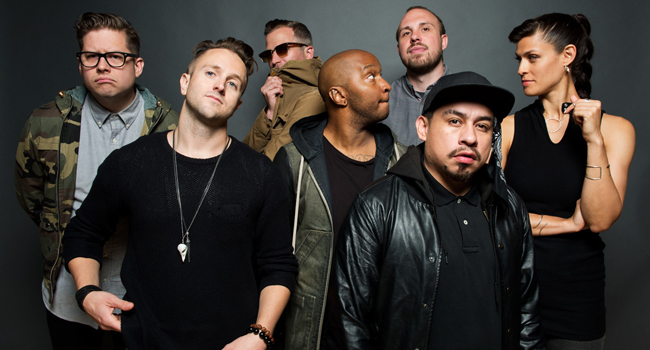 Watching Minneapolis hip-hop collective Doomtree perform live is like watching a group of stilt-walkers negotiate an airport security check-point with 50 ferrets stuffed down each pant leg—somewhat overwhelming, but ultimately entertaining.

From the drop of the first beat until the final sweaty chorus, each member of the group paced and pounced, pausing only occasionally to let their fellow members spit out another rapid-fire verse. The quintet of MCs, P.O.S, Cecil Otter, Mike Mictlan, Sims, and Dessa (who doubles as a strong alto), stalked the stage of Chicago’s Concord Music Hall armed with little more than their microphones and an energetic impulse to testify, as their dual DJ/producers Paper Tiger and Lazerbeak hammered out deft beats backed by a woven tapestry of propulsive sound.  Aside from the stationary instrumentalists, one has to wonder how the five vocalists avoid plowing into each other as they race back and forth on the stage.

Performing for just over an hour to a rapt, enthusiastic crowd, Doomtree rapped, sang, and bounced their way through a cavalcade of highlights, including “Final Boss,” “.38 Airweight,” “Heavy Rescue,” “Gray Duck,” and “Beastface” from their third official collaborative record, All Hands, released earlier this year.

The material from All Hands is laden with so much verbosity and sound, it’s as though Doomtree’s proverbial clip is overloaded, and the end result is to spray the crowd with powerful blanks as opposed to live ammunition.

It’s hard not to be overwhelmed by a set from Doomtree—these are masters of speeding speech, rhyme, and beats, so it’s not like the collective can break up the whiplash with a ballad.

Yet, the ensemble did harvest a few powerful moments when they paused the chaotic onslaught.  MC Mike Mictlan introduced one number by pointing out the (white) audience members who are unlikely to be the targets of gun violence in Chicago before leading his fellow rappers through repeated faux-gun brandishing, while during another number, the crowd raised their fists in unity with the posse.

Dessa sang “Call Off Your Ghost” from her solo record, Parts of Speech, while literally being held up by the hands of the crowd, and “Bolt Cutter,” from the 2011 Doomtree release No Kings, was another show-stopping moment—the whole ensemble was bathed in yellow while selling their anti-authority anthem.

The magnificent seven concluded the night with another piece from No Kings: their thesis statement, “Bangarang,” in which they rail against rappers who all sound the same and claiming their superiority.  Coming at the end of such a galvanizing and electric performance, that declaration was largely superfluous, but ended the night with a powerful resolution nonetheless.

Doomtree producer Lazerbeak has also collaborated with the “supergroup” Mixed Blood Majority, who opened the show by celebrating the release of their sophomore full-length Insane World.  Through militant rhymes and a mature dope flow that belies their youth, the trio laid bare what Doomtree usually shows, rather than tells:  that a dynamic fusion of multi-ethnic perspectives can create a compelling, cutting-edge hybrid of new hip hop.

There was an interesting yin and yang between Horton and Moon, similar to that between their Minnesota brethren, Atmosphere members Ant and Slug, as they sashayed through the title track, “Private Vs. Public,” “Burn That,” and the palpable disbelief of “You Wouldn’t Believe Me.”  While Mixed Blood Majority  can’t claim the stage domination and overwhelming presence of their Doomtree siblings, their set was a welcome table setting for the lyrical prowess and education that would follow.