How Raiders of the Lost Art Saved The Universe 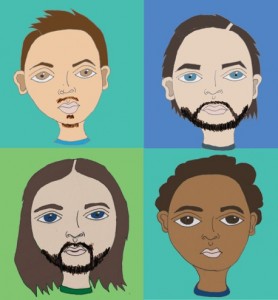 When Justin Scro and a few of his friends decided to start a band, they were not entirely sure what they would end up with. Even now, on the one-year anniversary of the group’s formation, the aesthetic of this experimental music project is not so obvious. Nevertheless, Scro discusses the details of his band, Raiders of the Lost Art, with glowing enthusiasm.

“The name comes from getting in and getting out with as much material as we can.” Justin says. He sees the band members as “Raiders,” bringing as much music into the world as they possibly can, and this industrialist approach to songwriting has suited them well. They have put out two albums in under a year and have a third slated for release in March, with an abundance of recordings already prepared for releases further in the future. This strategy is also responsible for one of the defining features of the group: All of their music is 100% improvised. At first, it would seem almost contradictory for a group so mindful of efficiency to go the way of jam bands and freeform jazz, but perhaps this is by design. The band’s music is, at times, honest to a fault, and it never denies an opportunity to subvert audience expectations. Their most recent record is titled Wabi Sabi, which Scro explained as meaning “learning to accept the beauty and natural state of things, warts and all.”

There certainly is beauty to be found in this music, though it hides behind an esoteric and bizarre veil. Justin is honest about his band’s material, and doesn’t try to ascribe meaning where there is none. He says that “the music itself is as influenced by if we ate well or not as it is by all the music we love,” but that’s not to say that there is no meaning to be found in their work. In fact, although the music is improvised, it is accompanied by a detailed narrative consistent throughout each album. In it, the year is 121980 A.D. and Raiders of the Lost Art have taken it upon themselves to save the universe from an artistic drought. Each record is performed from the perspective of their futuristic incarnation, although the story ultimately transcends the recordings. Justin admits that he and the rest of the band are “completionist music freaks” and he has taken a similarly thorough approach in crafting the band’s story. It is written in novel format (though Scro dreams of adapting it into a graphic novel) and features a number of sci-fi archetypes like alternate dimensions and rips in the fabric of space-time, effectively building a narrative arc with a level of detail that puts Radiohead and Gorillaz to shame.

Justin acknowledges the irony of an improvised record with a meticulously crafted backstory, which once again puts the Raiders in a weird, uncertain grey area between laboring artists and self-proclaimed “laidback mofos.”

But this ambiguity is part of the magic and what makes Raiders of the Lost Art’s records so oddly and wonderfully captivating.

As I listen further, I become less and less convinced that the music is even the focal point of this experimental project. Instead, it seems to merely be one element of a multi-faceted artistic landscape. Even though the Raiders’ aesthetic may not be obvious, that doesn’t make the band’s work any less meaningful. There is value in a group with the courage to do something completely unique, to push a new frontier—whether it’s rejecting present-day music industry conventions or saving the universe through song 12,000 years in the future. More than anything, there’s value in a group with the confidence to just do what they love, even if it means breaking some rules. “I wanted to show these guys that this stuff was worthy of existing, that making this shit up out of the pure air was actually interesting and no one else was doing it,” Justin says, “New has to have an edge to it and I’m glad the area we’re trying in is the art. It’s so much fun.”