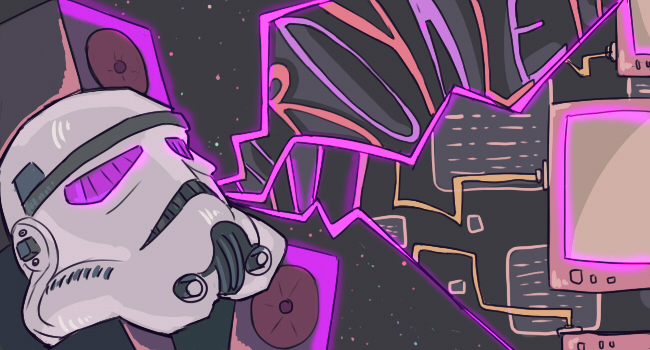 “I don’t know why people make fun of [Steely Dan]. That shit’s smart, it’s good…” says guitarist and vocalist Joel Bauman of Chicago band Royale, which he formed with his brother Nate. Bassist Marc Najjar chimes in, “People make fun of what they don’t understand.”

What some call “guilty pleasures,” Royale dubs musical influences—whether it’s Steely Dan or Star Wars—and the band shows them unabashed affection. The product of a successful Kickstarter and a little help from a lot of friends, Royale’s first album, …As Long as the Money Lasted, is a lush, sophisticated, sci-fi-infused “yachtmetal” record that stands in protest to the recent popularity of lo-fi.

“That funny genre, yacht rock, say what you want about it, but it’s definitely representative of a time of peak audio engineering,” Najjar says, “which is kind of the big appeal of really, really nice, expensive things. We all love heavy riffs and big drums, so we just kind of married the two ideas. It’s one of the reasons why we had the Kickstarter campaign, to pay for all of this high-quality engineering.”

The resulting album, according to Joel, is what would happen “if Steely Dan produced Mastodon”—that is to say, it merges the former’s ’70s-era polish with the latter’s power and grit. 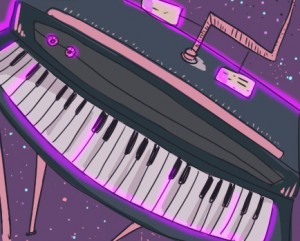 …As Long as the Money Lasted is incredibly technically involved. Royale used a Wurlitzer electric piano, arpeggiated synthesizers, a Leslie speaker cabinet, and a slew of studio staples. They’d hook multiple amplifiers up to one instrument so a single riff could produce four slightly different tracks. The record’s sound is as complex and layered as the methods used to produce it—it turns out sometimes, more is more.

“Every song has a little thing to chew on,” says Joel. The record’s opener, “Close to the Vest,” opens with an ethereal guitar pulse and the sound of a city train rolling by in the background—one of many little details that only distinguish themselves after multiple listens, making the songs come alive in a different way with each rotation. Records like …As Long as the Money Lasted are why people buy expensive stereo systems.

Joel takes on much of the lyricism, pulling from novels that are as complex as the music Royale makes—the works of Thomas Pynchon and Herman Hess, for example.

“There’s actually a lot of Bukowski all over the record,” Joel says. “He just has a turn of phrase or a paragraph or sentence that’s as gorgeous as any painting.”

In spite of the high-brow origins of …As Long as the Money Lasted, the lyrics play nice with the swirling gyre of music they’re paired with. Vocals float along as though they’re just another instrument, washing over the ears as opposed to puncturing through the wall of sound. This is by design. “We absolutely don’t want to be an intellectual or music school band,” Najjar says.

Both lyrically and musically, …As Long as the Money Lasted feels like it’s from outer space; the members of Royale geek out just as hard over sci-fi as they do over musical equipment. “I was watching the [new] Star Wars trailer at work and I got teary eyed in front of customers,” Joel confesses (he works at Chicago Music Exchange). Nate is quick to mention the band just bought a full-sized light saber at an estate sale. (“[We’re on] the good side, not the dark side.”)

The influence of their producer, Noam Wallenberg, pervades …As Long As the Money Lasted, having conceptualized elements like backwards guitar parts being played forwards. “They never were yes men,” Nate says of Wallenberg and Nigel Dennis, who performed on the record and created its cover art. “They would fight with you, and challenge you, and disagree with you…and those are the guys that you want on your team.”

Amassing the sheer number of elements at play in …As Long as the Money Lasted was no small task, but it’s paid off. “It tickles the audiophile bone, it tickles the art school/writer bone, the Prague bone, the metal bone…” Najjar says.

This is evident on the record itself and at Royale’s release show at Lincoln Hall on Jan. 9, where they played …As Long as the Money Lasted straight through. This was a tricky feat, given the number of collaborators on the album beyond the main three-piece. In order to execute the same full, complex sound on the record live, Royale added a third Bauman, Joel and Nate’s brother Zach, on rhythm guitar and keys. “He’s the color man,” the band says. He uses multiple guitars to shred or create texture, whatever is needed, “doing things that you might not notice are going on while it’s happening, but if we took it away, you’d notice right away,” Zach says.

Keeping it in the family was only natural for Royale; there are perks to working with people you’ve been scrapping with since childhood.

“It’s a lot easier pissing off your brothers than grown men you’re not related to,” Nate says. Joel adds, “With Nate, I can literally just beatbox [a drum beat] and he’ll just do it, and it’ll be right. And also because he’s a brother, if he does something and I don’t like it, I don’t have to be all, ‘Now, I don’t want to step on toes.’ It’s like, ‘Nate, don’t ever do that.’” 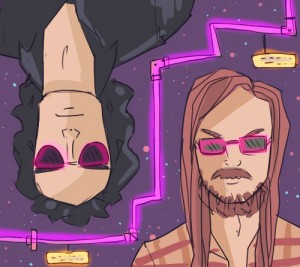 Before any of this begins to sound like Oasis-style infighting, it should be noted that the reason Royale got together in the first place is quite touching. “The reason we’re all here is that I really just wanted to play drums with Joel,” Nate says, “to the point where I switched jobs, I bought cars, bought a van. Joel and I have been playing together our whole lives. Fuck, I’m getting a proper album with my brother.” The progression from there has been a fast one. “Putting a band together is not easy,” Joel says. “When you have it all aligned, you have to run, real fast,” before anything spirals outward like a wayward comet.

For now, everything seems to be in control. Myriad musical influences and yachtmetal aside, one of the most refreshing aspects of Royale is the band’s guiltless verve for what many would consider guilty pleasures, and that no-holds-barred passion permeates every song of the expansive, yet intimate …As Long as the Money Lasted. And, as Joel says, “We’re just getting started.”

Look out for Royale’s acoustic releases, hidden demos, and rips to be released in 2015. For a taste of nostalgia, check out Pop ’stache’s first video with Royale.