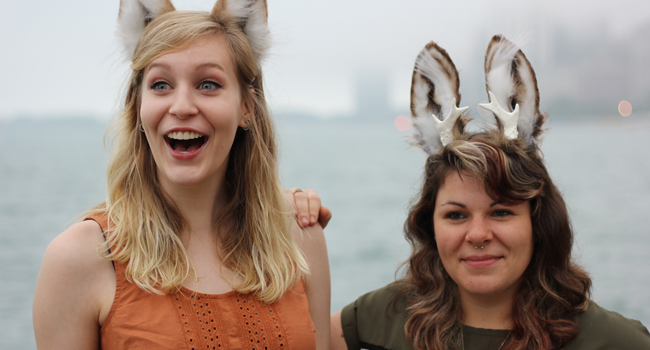 A Stroke of Luck

It’s rare when something good comes out of a bad roommate situation. In most cases, you’re lucky if you can escape with your dignity and security deposit intact. But for KC Weldon and Shea Briggs, a matching dissatisfaction with their living situations brought them together three years ago to form what would eventually become The Just Luckies.

Weldon, lead singer and guitarist, was eager to find a replacement for an impossible roommate, and Briggs was still living with her ex-girlfriend after breaking up a few months earlier. While Briggs was looking for apartment leads, a mutual friend connected them, and the rest fell into place.

“I went to Shea’s apartment and I saw this table made out of an old drum set, so I asked her if she played drums. When she said yes, I was sold immediately on her being my new roommate,” says Weldon.

After rotating through several different band names (past favorites include The Bluebirds, The Slut Puppies, and The Sluppies) and another member who didn’t work out, Weldon and Briggs landed on the band name The Just Luckies.

“We really liked that the word ‘just’ has a double meaning—like, we are just lucky, it’s only a coincidence, but the word also represents morality,” Weldon says. “We write a lot of songs where we ask, ‘What’s the right thing to do in this situation?’ Thinking about justice is really important to us and our music. The word ‘just’ can mean insignificant, but it can also mean something incredibly important.”

That juxtaposition between the important and the insignificant neatly sums up The Just Luckies’ songwriting style. The songs from their debut EP Red, White, & Bruised are just as whimsical and upbeat musically as they are serious and earnest lyrically.

It’s clear that Weldon, whose voice and delivery is reminiscent of Jenny Lewis on early Rilo Kiley recordings, sings these songs not just because she wants to make music, but because she has a lot to say — the song “Three Chords and the Truth” is a good example, with references to labeling GMOs and a line urging listeners to tip their servers.

“I’ve always had trouble not sharing all of my opinions,” Weldon says. “Lately, I’ve been trying to remind myself that not everyone needs to know what I’m thinking all of the time—but when I’m writing a song, I get to say whatever I want.”

Throughout the name and lineup changes, Weldon and Briggs’ vision for the band has remained consistent. “We always felt KC and I were on the same page, but trying to find other people to get on board with our project and vision was kind of difficult,” Briggs says.

“Being on the same page” doesn’t begin to describe the relationship between Weldon and Briggs.

Their support and admiration of each other as musicians and friends is evident in the way they talk about each other, whether they’re finishing each other’s sentences, laughing at each other’s jokes, or building each other up. While discussing their writing process, Briggs mentions that she usually has vague ideas that Weldon will translate into more coherent lyrics and metaphors. But then Weldon jumps in, clearly feeling like Briggs isn’t giving herself enough credit. “Sometimes you bring me solid lyrics,” Weldon says. “You pretty much wrote ‘Restless Nights.’”

“KC has definitely pushed me to become a better musician and discover more of myself and what I want from music,” Briggs says. “She also taught me how to play the ukelele. I had no idea about string instruments.”

Once again, Weldon jumps in for a slight correction. “You already had rhythm. That’s all you need to play chords.”

After years of playing as an incredibly close duo, The Just Luckies recently welcomed the addition of lead guitarist Alex Williams, who Briggs and Weldon consider a perfect fit. “She’s so on the same page about everything—what we’re going to get for lunch, where the riff goes in the song—all the important things,” Weldon jokes. “And she can shred!”

The album is a marked difference from the musical sparseness of last year’s EP—which was largely Weldon’s vocals and guitar with Briggs on drums—now that they have Williams on lead guitar and the addition of bass and backup vocals. Weldon describes the feel of the album as very quirky, with a lot of rock ’n’ roll and folk influences.

They’ll also be releasing a music video for one of the new songs, “Hello Please.” The video depicts Weldon, Briggs, and Williams beaten and battered, with cuts and dried blood painted on their faces, the morning after a night of partying that they don’t remember. Briggs says people were stopping them on the street to ask if they were okay. “We looked pretty scary,” she says.

“The video and the song are fictionalized versions of the terrible shit that’s happened to us and the mistakes that we’ve made,” Weldon adds. “I originally wanted the album cover to be us with a million cigarettes in our mouths.  I don’t even smoke, but I just feel like cigarettes are a representation of all these little things we do to fuck ourselves over, just a little bit.” 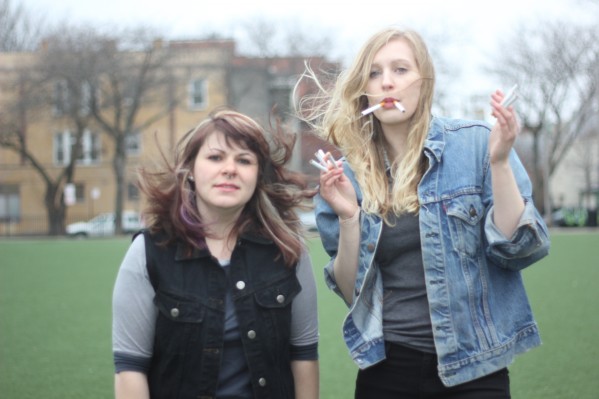 As excited as they are about releasing their new album, their main focus is still on playing shows. The Just Luckies have shows coming up in Grand Rapids, Detroit, and a couple tentative Chicago dates in August.

“The best feeling is after a show when someone comes up and says something like, ‘I really like that line in your song about how kittens don’t last as long as tattoos.’ I think that is my favorite part,” says Weldon.

“It’s like finishing a drawing or an art piece. When somebody buys it, you just really hope they’re buying it because they’re getting something you put into it, and not just because they need something to match their couch. That feeling that there’s a stranger out there that gets you—I love that feeling.”

The Just Luckies’ EP Red, White & Bruised is available on iTunes and streaming on Spotify. Their debut album, Same Kids Same Things, will be released in July or early August.