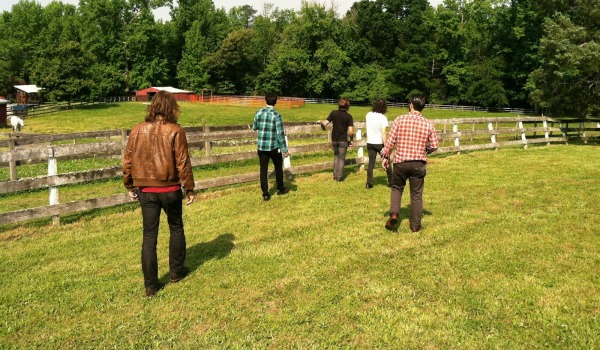 Saturday night at the Empty Bottle, as if commemorating the first day of 2014 on which temperatures surpassed 70 degrees, provided a raucous sold-out show headlined by Brooklyn pedal-pushes The Men, accompanied by tepid, local performers Vee Dee and Basic Cable and a diverse audience linked together by a mutual love for button-up flannels.

Vee Dee, the admittedly finely tuned three-piece that opened the evening around 10:30, played a benign handful of jazz-infused acid rock songs in the vein of what one might imagine early Queens of the Stone Age would sound like if Josh Homme had spent his time listening to Jeff Beck records instead of tripping on LSD in the desert. For the most part, the band’s set was solid if not somewhat uninteresting, filled with redundant harmonies and odd percussion eccentricities that just reeked of, “Dude, what if I, like, used a tambourine for this part or something? That’d be sick.”

Ultimately, Vee Dee’s best came through when showcasing their jam band chops, as the trio did include a tasteful number of fuzzy psychedelic digressions inserted into otherwise bromidic rock numbers.

Basic Cable quickly followed, playing the sort of music one might expect to hear narrating a car commercial aimed toward attracting the evasive “young” demographic market. Despite the band’s noise-rock melodies being, for all intents and purposes, indiscernible to a casual listener, the audience seemed inclined to give the group the benefit of the doubt, because they just seemed so darn happy to be there. This effect quickly dwindled, however, because despite allotting time for the amount of stage banter that a penultimate act can just barely get away with, a handful of audience members seemed more interested in waiting in line for the pool table.

Perhaps this wasn’t entirely Basic Cable’s fault, however,  it seemed like a significant amount of those in attendance had no idea where they were. The group did have a few infectious riffs, but many of the Empty Bottle’s patrons, looking as though they’d just stumbled in from an adjacent bar, were less than interested.

Eventually, around midnight, the headliners appeared. The Men, who looked like some of the younger people in the room, wasted no time in belching out ferocious songs from its recent record(s), splitting vocal duties between three of its five members.

A candle and some incense, atop the head of a guitar amp, provided aromatic ambience as the set began.

Understandably, there were no throwback songs included here: All the material came from Immaculada and Leave Home— the band’s freshman and sophomore albums, respectively— were absent, probably due in part to issues of personnel. The decision to omit said material made sense. Some time over “Pearly Gates”— the six-minute-long opus off the group’s latest record, Tomorrow’s Hits— the most organic of mosh pits appeared, wherein the three schools of The Men’s fans made themselves apparent.

These were: Weathered punk show veterans, likely vestigial remnants from the band’s earlier days spent playing in basements instead of venues; doe-eyed bystanders eager to join in, but not entirely sure of the procedure and protocol; and actual old people lured by the promise of a band channeling Neil Young a lá Crazy Horse (which, to its credit, did not disappoint). The last, as one might reasonably expect, were content to nudge friends and point at the skirmish from afar.

Overall, The Men played for the better part of an hour to a thoroughly mesmerized crowd, including a heartily requested encore (during which the group played an additional song and a very well-suited cover of The Stooges’ “I Wanna Be Your Dog”). Around a quarter past 1 a.m., as people milled around the merch table and filed out of the venue to light up post-show cigarettes, the sense of refreshed fulfillment was apparent.