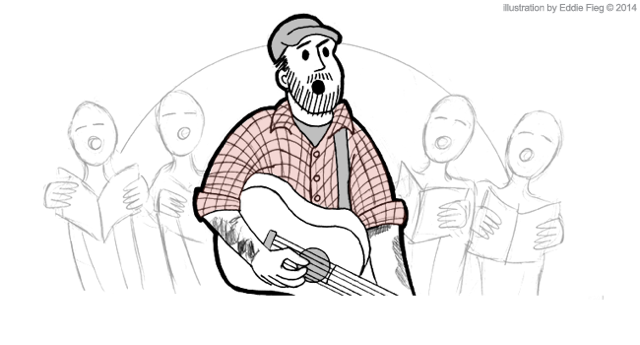 Preaching to The Homeless Gospel Choir

It’s hard to ignore an act like The Homeless Gospel Choir—if not because of solo artist Derek Zanetti’s unique voice, then because of his politically, socially, personally, and sometimes humorously charged lyrics that make you want to get up and change something in the world, or maybe just yourself.

The Homeless Gospel Choir is an unapologetic acoustic project by Pittsburgh native Zanetti, who writes music that points fingers, draws attention to touchy subjects, and makes you think, all under a loose structure incorporating punk, folk, and indie rock.

“When I was a younger person, I just really liked the aesthetic of punk rock,” Zanetti says, “and what it meant to be a part of something that was different. I saw a really attractive sense of belonging that came along with punk rock and counter-cultural music.”

Zanetti has carried his punk roots throughout his four releases, though he traded the idea of a full band for a solo act and swapped heavy riffs for folky Americana melodies. However, the 2014 album I Used to Be So Young features several backing musicians from Pittsburgh punk and pop-punk bands, including members of Anti-Flag, White Wives, Mace Ballard, and Endless Mike and the Beagle Club.

“The idea was to have this big traveling group of people, but it just never turned into that, so it was just me playing my guitar as The Homeless Gospel Choir,” Zanetti says. “But, even though they helped me play on the record, I still tour by myself just because it’s easier for me to convey my songs in a very rudimentary and basic way.” 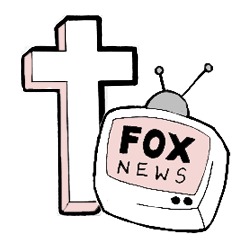 Although Zanetti is alone on stage, his outspoken lyrics command attention. The recurring verse that appears at the end of several songs on I Used to Be So Young, “Jesus Christ didn’t die for you to be an asshole,” cuts to the core of religious hypocrisy.

Zanetti says he was inspired by watching a lot of FOX News and conservative and religious television. “All these horrible things were happening in the world and a lot of people were attributing it to Christianity,” he says. “They were saying, ‘We’re doing this because this is what Jesus Christ or God wants us to do and this is what’s best for America,’ and I was sitting there on my couch and I started to write this song. I couldn’t come up with any bridge, I just had these lines, and it was, ‘Jesus Christ didn’t die for you to be an asshole,’ and I just sang that over, and over, and over again…He didn’t die for you to eat at Golden Corral while there’s starving people on your very street; he didn’t come to save Chick-fil-A and to build up your 401(k); he didn’t come to bomb Middle Eastern countries for their oil; he didn’t die for you to have a license to be a piece of shit.”

Zanetti’s ideas aren’t limited to one medium; he recently wrote a book called Existentialism the Musical, a collection of short stories and thoughts about life. 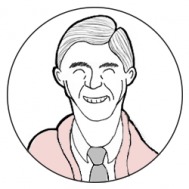 After just recently returning from a tour with spoken word band Listener and punk duo ’68—which marked his 150th show with Listener—Zanetti is finishing a follow-up to his first book and plans to work with Dan Smith, vocalist and bassist of Listener, on a new project called Neighborhood Fan Club, a band dedicated to Mr. Rogers.

Zanetti has always found peace in being part of something different, and he’s got plenty more unique and honest art to come.