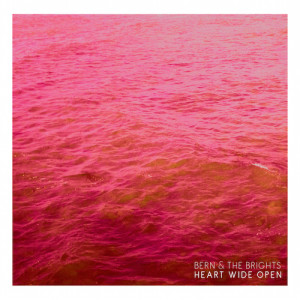 Every now and then, an indie artist emerges to complete stardom — launching from 100-person shows to selling out 2,000 seat theaters in front of their biggest fans. Bern & the Brights are restlessly balancing on the fine line between indie darlings to full out celebrities. Bern & the Brights is back for their fourth EP, Heart Open Wide, with five electronic-heavy songs that ooze with sometimes too passionate bursts in every note plucked, strummed, and sung. The EP’s title itself is a perfect description of the integrity and intent found in each and every song. Bern & the Brights’ vocalists and multi-instrumentalists Bernadette Malavarca and Catherine McGowan must have been in a good place to create such feel-good, inspiring songs. Their intentions, however, can come across as a little too-on-the-nose. Heart Wide Open oversaturates Malavarca’s and McGowan’s natural talents — like their strong, crystal-clear voices and distinct songwriting abilities.

The most sing-along-worthy song on Heart Wide Open is “Beautiful Morning,” which sounds exactly like what the title suggests. This is a song to roll down your windows to and scream at the top of your lungs. Even the promotional lyric video for “Beautiful Morning” mimics a sunny drive down a coastal road. But underneath the seemingly happy exterior lies a hauntingly darker meaning. Lyrics like, “Don’t be mad, he’s a good guy/He don’t remember the punch in the eye/But you do, you remember well/All the pain, all the strife, and the hell,” suggest an abusive relationship. But the song really isn’t necessarily about a specific abuse. It’s about gaining the ability to overcome the awfulness of a harrowing intimate experience.

A mix of sad songs with major chords is usually an interesting contrast, but, as a whole, Heart Wide Open is an overload of cutesy electronic riffs and the same pre-programmed drum beat, and it doesn’t stray far from it. The music resembles elements of radio-friendly electronic-pop, more so than the dream pop label they initially adopted. The “dream pop” direction they’ve gone is drastic, as they included many more guitars and acoustic drums in their last record Work. The huge leap Bern & the Brights made to create a new sound is slightly overdoing it, and may even turn off their core fanbase.

What’s most striking about Heart Wide Open is how Malavarca’s and McGowan’s voices blend together. Whether they both sing a melody or choose to harmonize, they sound like an entire choir booming out of just two throats.

Musically, Malavarca and McGowan were made for each other, and their vocals remain the strongest aspect of the music with a knack for catchy songwriting not far behind.

Although Heart Wide Open is filled with distinct and compelling songs, it is at its strongest during the title track. A driving, yet laid-back drum beat fits quite nicely between elegant touches of keys and, yet again, stunning vocals. Bern & the Brights sound the most compelling when they balance synths, samples, electric guitar, and acoustic drums. They have the songwriting down, but, if they lessen the droning electronic aspect of their music, they might just hit one out of the park. Heart Wide Open is a career-defining change, and it isn’t necessarily a bad thing. Bands with similar qualities, like Tegan & Sara, have jumped all over the map by changing their sound, and Bern & the Brights have followed their lead.

Their unique chemistry, unparalleled songwriting, and ability to play multiple instruments are a few of the great many things Bern & the Brights have going for them. Whether or not they care about getting radio play is extremely personal and can change one’s life, for better or worse. There’s a great possibility Bern & the Brights are headed down that road, and there’s no doubt that they’re ready.