Home → Features → Cherry Popper → The Time Is Now For Hemmingbirds 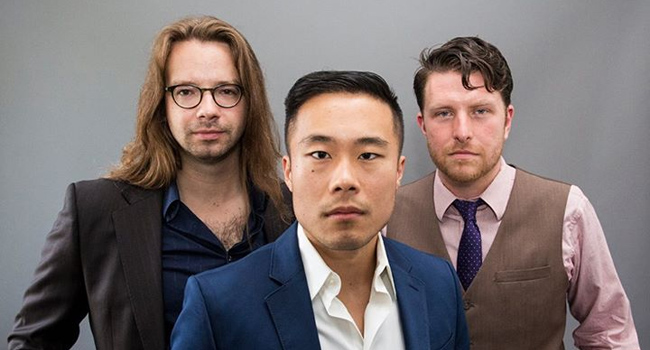 The Time Is Now For Hemmingbirds

Chicago’s Hemmingbirds impressed quite a few listeners with their polished 2010 debut, Death Waves, and we’re even more  wowed by their more self-assured and multidimensional sophomore outing, 2012’s The Vines of Age, both self-released. The “Bible” of college radio, the College Music Journal, showed the debut charting at #109 on their Top 200, whereas Vines peaked at #47. The group has been named Alternative Press’s AP&R Band of the Day, and have garnered accolades from Chicago Metromix/RedEye, TimeOut Chicago, Chicagoist, Windy City Rock, Loud Loop Press and Dedicated Ears. While Death Waves was almost entirely the work of lead vocalist and lyricist Yoo Soo Kim, for the second record, Kim expanded the recording line-up into a quintet to further flesh out their sound.

Although he lives in Lakeview, Kim says the band’s practice space is pretty small and not a good space for an interview or photo shoot, so he agrees to meet in the office of the Chicago Independent Radio Project in the North Center neighborhood. It’s a sunny and humid Sunday afternoon outside as the young and diminutive Kim climbs the stairs of the multipurpose warehouse/factory space and makes himself comfortable on a freshly donated chair. Clad in a red t-shirt and jeans and sporting modest but modern eyeglasses, he comes off less like the passionate rocker he seems to be on record and more like an introverted graduate student—fitting for someone who pays his bills by working for The Princeton Review, doing marketing and helping kids prepare for the ACT and SAT.

Growing up in the Chicago suburb of Lincolnwood, Kim’s family was always musically involved, to a certain extent, and his grandfather was into a lot of “Korean folk music” which uses “Korean specific instruments. “He’d always be playing stuff at home,” Kim says, inspiring him to start taking piano lessons in first grade.

The “orchestral pop” sounds of Hemmingbirds can be traced almost as far back. For third grade orchestra, he was planning on playing the violin, but the magic of the alphabet interfered. Kim’s teachers called on the students in alphabetical order by first name, so, of course, Yoo Soo Kim was among the last to be called. As he puts it, “all these kids in front of me were picking the violin, and I thought “I don’t want to play everything that everyone else is playing,” so I just arbitrarily at that moment picked viola, and I think I’m pretty happy with the decision.” He stuck to those two instruments alone through the eighth grade, and discovered he enjoyed strumming his viola so much he became intrigued by the guitar. He received his first acoustic guitar from his aunt as an eighth grade graduation gift, “and from then I was super obsessed.”

As he was entering high school he discovered Napster and downloaded Green Day for the first time, and “that sort of blew my mind, ‘cause at that point I didn’t really listen to any rock music” and Billie Joe Armstrong and company played with “all the energy to it that I never really felt from other music I listened to– that was a big inspiration on initially getting me into playing punk rock music.” His uncle gave him a handed-down Japanese Stratocaster, and he formed a punk band with two of his best friends who played bass and drums. He learned to play those instruments by spending time hanging out with them.

Kim has done all the “producing” and engineering on both Hemmingbirds records, and he says he’s always been a “do-it-yourselfer” at heart. He’s pretty much self-taught in audio engineering. “I was very stingy . . . Why pay for a recording studio when I could try to figure it out on my own? I had a computer with a very crappy sound card, maybe to just plug one channel into, and I would try to record songs through there. I just kept practicing and getting better and better at it, and some of my friends in my circle were also doing the same sort of things so we would swap ideas and switch gear and stuff.”

By the time he went to the University of Illinois in Urbana-Champaign, he was playing all those instruments, had acquired more recording gear and started his first “real band,” Post Historic, with his friend Jesse Johnson, now of Chicago band Jet W. Lee. He describes that experience as “a learning process.” “We were trying to figure out what it took to be a real “legit” band– in terms of figuring out how to do local shows, touring, promoting and all that . . . and I was still involved with engineering.” He did live engineering at The Canopy Club in Urbana as well, which he describes as “a lot of fun.”

Although Kim majored in psychology at U of I, he minored in music, but he describes their music program as having focused on the “orchestral and classical side.” He learned to do engineering by reading blogs, magazines and through his live engineering experience, during which he “met a lot of cool bands,” which also helped him learn how local booking works and how to be a “professional band” and how to “act professionally.”

Kim is nothing if not professional during the interview—he knows he’s here to sell his band, but he doesn’t talk like a marketer per se. He talks like someone who has loved music from day one, and if he possesses a quiet passion for his art, it’s a passion nonetheless.

The leader of Hemmingbirds always wanted it to be a full-fledged band, even though the first record was mostly a solo effort (the exception being drums provided by Post Historic bandmate Zach Benkowski on eight of the ten tracks). “I wanted to tour and play shows and all that … and the only way to do that eventually was to get a band together, and at the end of the day, I do like the creative process of jamming and writing songs. I do like the whole organic factor of that, as opposed to writing alone.”

Kim says that he comes up with “better ideas” when he’s playing with someone else and they have “that raw energy going.” “For me that’s when I feel I come up with my best ideas,” and having other band members in the mix “can put you in an element that you’re not comfortable with.

And I think if you write by yourself, especially if you’re me, if you write on the guitar that I always write on, I’m always going to be sort of veering into writing the same sort of things, and I can’t get out of that mindset. But if I play with someone else, they could put me in a direction, somewhere I wouldn’t expect, and I would come up with an idea that I’m not as bored with.

When presented with the idea that having other musicians involved also allows an outside gauge to tell you when your “shit stinks,” Kim lets out a laugh and agrees wholeheartedly. “That is also pretty helpful. That is the scary part, if you do everything on your own and you finally have someone listen to it, you’re like, “Dear God, I hope they don’t rip this apart.”

In addition, while he says doing the debut solo made him want to play everything loud and fast, Kim ascribes the greater dynamic differences between songs on The Vines of Age to integrating additional musicians into the creative process. While Hemmingbirds drummer Benkowski is a Foo Fighters fan, their bassist Matt McGuire, for example is really into Nine Inch Nails, whereas Kim says he brought “softer, folkier influences” into the songs on The Vines of Age. The fivesome also includes Ben Avci on keyboards and Timothy Cap on guitar, percussion and vocals.

When asked about other influences aside from Green Day, Kim points to his junior year at Niles West high school in Skokie, when on his first day in a class taught by David Klingenberger, the English teacher pointed to a poster and asked the students if anyone knew who was pictured. It was Thom Yorke, lead singer of the teacher’s favorite band, Radiohead. Klingenberger, Kim says, was “very influential in terms of us challenging ourselves and listening to music or literature, stuff that we’re not initially used to, but you have to reassess multiple times.” He cites his teacher’s favorite, Amnesiac, as well as Kid A as albums that are at first very hard to digest, but “once you get them, they’re great songs, and their arrangements are very complex, and that changed my perspective on how you approach songs and how much you should put into songs.”

Kim says he and his fellow Hemmingbirds struggled for a long time on what to name their sophomore record, before arriving at The Vines of Age. The title was taken from a line in the lyric from the song “Vineyards,” and he says “it encompasses the album pretty well.” While writing the songs, Kim says he was “struggling to realize what I wanted to do and actually having it come to fruition.” When his parents had been only a few years older, they were married already, and he was beginning to wonder what was to become of his life. “Once you’re a twenty-something, you have a specific relationship with your family, and your dad as well and your grandfather. You can look up to your mother for support, but in terms of how you are as a person, I think a lot of it is shaped from your father,” and he see parallels in terms of how he’s similar at a certain age or would want to do things differently or think differently.

The record is about shaping who I’m going to become … the whole record’s about you being in this dream, and the vines are things that are growing in your brain. The vines are your family lineage, and the vines can reach a point where it wraps around your brain where you’re so clouded within your genes that you can’t see who you are anymore, or who you’ve become anymore. It’s like you’ve fell into becoming this person that you maybe didn’t want to be, but it came to a point where you don’t even realize it anymore. So “the vines of age” is like, will I try to  change that and not become clouded within that and try to shape who I want to be.

In terms of what’s next for Hemmingbirds, Kim says they’ll release a song from The Vines of Age, “My Love Our Time is Now” as a single and are working on a video to go along with it. The band plays Taste of Chicago on July 14 on the Bud Light Stage before another local favorite, Kelly Hogan. Click here for the complete schedule.