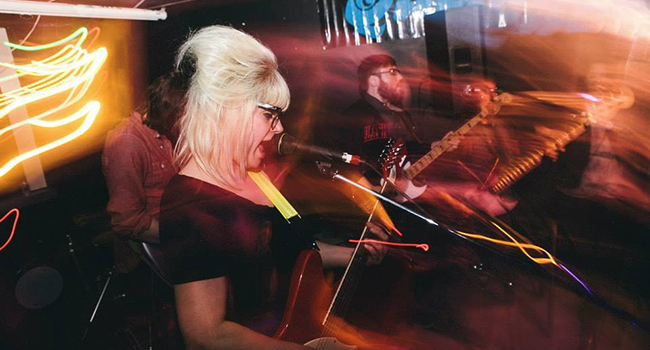 This past Saturday, The Burlington in Logan Square became The Girlington (to steal a line from Bleach Party’s Meghan MacDuff). The intimate basement venue played host to the second annual Frontwoman Fest, a showcase of female-led bands that raised $1,400 for Girls Rock! Chicago.

I’m naturally biased toward the punkier sets, but the fest had a phenomenal lineup with something for everyone. Got a taste for weird ambient tunes? TAL and Haki have got you covered. If you like meaningful, poppy electronica, try Axons, and for a more straightforward indie sound, check out Impulsive Hearts. In fact, check out all the bands that played Frontwoman Fest on Bandcamp—there wasn’t a bad act among them.

Bloom was a last-minute addition to Frontwoman Fest (Yoko and the Oh No’s had to cancel due to sickness), but the local three-piece stole the show, performing with the power and lovable energy of a labrador gamboling up to the crowd. Granted, there was little to separate Bloom from any other pop-punk band—the music was high-energy, it was young, it was often heartbroken, you get the picture—but that didn’t stop them from kicking ass. Sam Larson’s voice is a force to be reckoned with, and the band’s limited recorded output is only a shadow of its live performance, so keep an eye out for a chance to catch Bloom live.

If your stereotypical four-dude rock band took an hour-long soak in bathtub gunk and rusty nails, then emerged doing a high kick, the result would be Strawberry Jacuzzi. Their quick and dirty punk was campy, quirky, exhilarating, and more than a little chaotic, a combination that electrified the entire room. With song titles like “Bucket of Puke” and “Love Is For Suckers,” Strawberry Jacuzzi is like an even meaner, more in-your-face version of Cincinnati’s Tweens, and of all Frontwoman Fest’s stellar performances, theirs was the biggest party.

As befits a showcase of frontwomen, every single act boasted a powerful set of lady pipes, but Bleach Party’s Meghan MacDuff stood out even among that impressive crowd, and the band’s sound was as wild and fun as her mini beehive. In an episode of Scooby Doo set at a haunted luau, Bleach Party would be the band onstage. Half the time, I didn’t know whether to mosh or do the twist, but one way or another, this surf-punk act is gonna make you move.