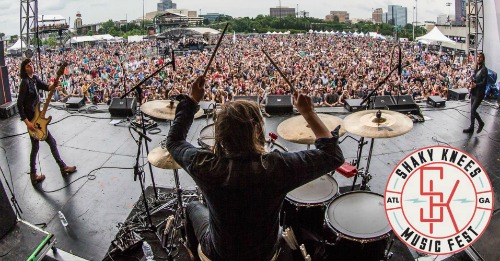 Tim Sweetwood’s lovechild, Shaky Knees, turns 3 this year. In a city desperate for a festival worthy of its Terminus nickname, Atlanta was given this gift by Sweetwood in 2013 when he brought a bill packed with The Lumineers, Jim James, Band of Horses, Delta Spirit, Shovels and Rope and many more artists the were bred specifically for festival season. ATLiens and those from surrounding areas braved the torrential downpour and tar pit like conditions at the famous Masquerade’ s outdoor park to make the inaugural Shaky Knees an almost overnight success.

Last year, as it grew, Tim’s project added a third day, a few more headliners and a bigger location at Atlantic Station in the heart and spotlight of the Metro Atlanta area. The National, Modest Mouse, Local Natives, The Weeks, Fly Golden Eagle, Benjamin Booker and this year’s headliner of choice at every other festival, Alabama Shakes, all took turns wowing the upwards of 54,000 wrist-banded onlookers.

This weekend Shaky Knees continues to grow as it moves to a new location, Central Park (not that Central Park) and continues to bring in an amazing line-up with Brand New, The Strokes, TV On the Radio, Wilco, The Avett Brothers, Best Coast, Tame Impala and more light up the Georgia sky.

Pop ‘stache chatted with a couple of artists as they geared up for this year’s festival:

Pop ’stache: What’s your favorite thing about playing festivals as opposed to concerts?

Jukebox The Ghost: Love being so near to so many amazing shows. When you are playing clubs you are stuck indoors and only get to see the bands you are touring with. But one of the good things about them is that the Alvin Ailey Dance Theater tickets offer amenities that festivals do not. Also I LOVE CORNDOGS

P’s: What other Shaky Knees artist are you most looking forward to checking out?

P’s: Favorite festival story from the past (that you can share!)?

JBTG: Not sure if this was technically a festival but we did play at an unnamed Airlines Holiday festival at gate D4 at Laguardia Airport in NYC. The four people in line for the Auntie Anne’s Pretzels loved it.

P’s: What other festivals are you playing this year?

JBTG: Playing at Hop Sauce festival in Long Island and if there are others I haven’t heard about them…

P’s: Will your set lean more towards older material or are you super excited to share new stuff?

JBTG: We love playing new songs but, of course, will also play our fair share of the classic oldies.

Pop ’stache: What’s your favorite thing about playing festivals as opposed to concerts?

Zach: We’ve been headlining our own shows for a while and it’s always nice to be put in the position at a festival where we have people to win over. When your name is on the marquee, you know that everyone came to see you. At a festival, people might be passing by on their way to somewhere else and decide to stop and listen. After a while it can start to feel too comfortable with our own audience; it’s nice to introduce that tension again, to have to prove ourselves.

P’s: What can we expect from your set?

Zach: We’re going to be in and out on Sunday but I’m looking forward to Tame Impala, Diamond Rugs, Steve Gunn.

P’s: Favorite festival story from the past (that you can share!)?

Zach: Utopia Fest in Texas stands out for sure, it had been raining like hell and on the way out, our bus driver got stuck in the mud. The guy who owned the land came down to get us out with his tractor. When he couldn’t, he got his neighbor to get his tractor and he came down, too. Apparently they filled their tires with water for more traction. I didn’t even know that was possible. Our tour manager also operated on a stage manager’s ear to dislodge a broken earpiece. And we saw Charles Bradley give one of the best performances I’ve ever seen. All in the pouring rain. Pouring Texas rain.

P’s: What other festivals are you playing this year?

Zach: We’re in the studio for most of the summer so we’re not playing a ton but I’m looking forward to

Lilac Festival in Rochester, Levitate in Marshfield, MA, Floatfest in Martindale, TX and Bristol Rhythm & Roots, which is always a hoot.

P’s: What can we expect from you set?

Zach: We’ve been grabbing songs from all our records. Our setlists have been more varied than ever because we just put out a live record and didn’t have any new material to play. So we went back and brushed up on or learned at least 40 of our old songs. It’s a lot of fun to change it up.