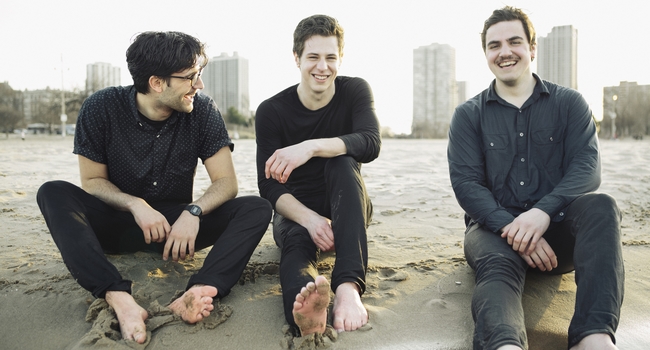 “Things with sex are really fucked up,” says Andy Milad, lead singer of Michigan-based trio Wayne Szalinski. The band is set to release its first full-length, Black Mirror, Oct. 21, but you can stream it in full exclusively at Pop ’stache below. Most of the album, though its punchy and intricate melodies sound upbeat, explores the dark exchange between sexuality and violence.

Black Mirror follows the downward spiral of a fictional relationship pulled from bits and pieces of Milad’s own romantic entanglements. He says the lyrics stem from reflecting on his role in situations that ranged from uncomfortable to downright toxic.

“In every relationship, I feel like I carried the weight too much,” he says. “For years, even up to now, I think I behaved immensely selfishly as a result. Sacrificing any part of myself has been only something that went poorly for me, and I think that makes you kind of a bad person.”

He says in his current relationship—which influenced “In the Morning,” “Kiss Me In The City,” “Tell Me Lover,” and “Some Collagist”—he and his partner are trying the selfish approach; they only see each other if they want to, and neither belongs to the other.

Before that, though, his past relationships left him, in the words of “Atrophy for Lethargy” (a two-year-old track re-recorded for Black Mirror), “shattered on the floor.” “Exfoliate” and the re-recorded “Bandages” most violently express how Milad felt looking back. In “Exfoliate,” he sings, “I want you dead/Swallowing you up/Wouldn’t be enough.”

The last two songs, however, are more self-reflective.

“[‘Bandages’ and ‘Exfoliate’] are…the worst parts of me,” Milad says. “I really wanted ‘Atrophy’ and ‘Some Collagist’ to come after those, because ‘Atrophy’ expresses a lot of remorse. [The closing line is, ‘I am a monster and I made it so.’] I wanted ‘Atrophy’ to really say that I’m responsible. And I wanted ‘Some Collagist’ to come even after that, to say, ‘Could we try again? Can I try again?’”

Black Mirror will be released Oct. 21. Pre-order a vinyl or digital copy on Wayne Szalinski’s Bandcamp.