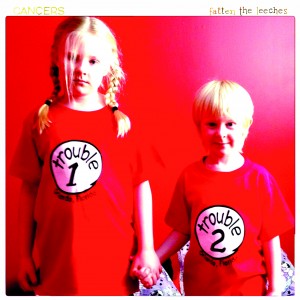 Okay, we get it. The phrase “fuzz tornado” gets thrown around a lot these days– but Cancers is the real deal, take it from us. And if credibility is your concern, consider this: the band’s new album, “Fatten the Leeches,” was produced in Seattle (truly the Graceland of grunge) by none other than Jack Endino, a man previously involved in the production of records by Nirvana, Hole, Babes in Toyland, and Soundgarden.

“Fatten the Leeches” has nine other songs you can seriously get your ’90s on to, available at Dirt Nap Records.